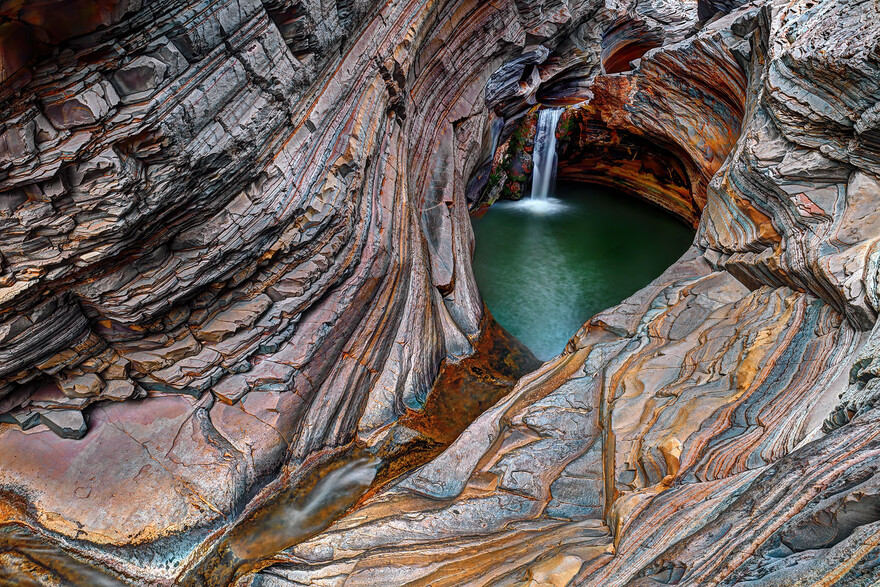 Hamersley Gorge with its picturesque Spa Pool in Karijini National Park in northwest Australia opens a window into the beginning of Earth, into a time when bacteria were the only inhabitants on our young planet. These colorful layers of rock are banded iron ores that formed more than 2500 million years ago at the bottom of a long-vanished ocean. At that time there was little oxygen in the ocean and no oxygen at all in the atmosphere. Moreover, the fascinating history of this region dates back even further into the Earth's history. The bedrock of northwest Australia formed more than 3600 million years ago to form an archaic continent called Vaalbara. These unimaginably long timescales have to be put into perspective to better relate to them. The first animals were creeping across the seabeds only 500 million years ago and the dinosaurs disappeared a mere 65 million years ago. Compared to today, the young Earth was much hotter in its interior 3.6 billion years ago. For this reason, the bedrock that formed the continent consists of a solidified type of magma that has different modern equivalents. This magma slowly solidified in the earth's crust to form the precursors of today's granites and erupted on the surface as extremely hot lava, named Komatiite, which was as fluid such as water. 2700 million years ago, shortly before the formation of the banded iron ore of Karijini, a profound plate tectonic rearrangement occurred. During this process, Vaalbara broke up into two continents called Kapvaal and Pilbara. While the Kapvaal continent is now part of southeastern Africa, Pilbara became what is now northwest Australia. Strong volcanic activity occurred along this fracture zone, and the two continents began to drift apart. First, the rising magma broke its way to the surface through continental crust. Through contact with the surrounding granites, the lava became highly enriched with silica and gases, and therefore became pasty and viscous. This resulted in explosive volcanic eruptions with rhyolitic lava. Above these layers, komatiite lavas are deposited, which documents calm and effusive volcanism, since the magma no longer came into contact with the granites as a result of the progressive continental drift. These volcanoes buried the former landscape under a flood of lava. The rift between the two continents had opened wide enough for the primordial ocean to intrude the depression to create a shallow sea with a mid-oceanic volcanic ridge. As the ocean slowly opened wider, the flooded continental fringes of Kapvaal and Pilbara became calm and shallow seas with stable environmental conditions, while the volcanoes on the sea floor between the continents continued to be very active. This setting is the archaic counterpart to today's East African rift valley system with the opening of the Red Sea. However, with one significant difference compared to today: At that time there was no free oxygen in the atmosphere and only small quantities in the upper ocean. This is the reason why we can admire the banded iron formation of Karijini – a unique rock formation with no modern equivalent. How did it form? Countless hydrothermal vents along the newly formed mid-ocean ridge emitted large quantities of dissolved iron into the ocean. Because the deep ocean contained no free oxygen at that time, the iron remained dissolved in the seawater and colored it brown-red. Ocean currents transported the ferrous water to the warm shallow seas along the continental shelves of Kapvaal and Pilbara. These seas offered an ideal environment for a variety of microbial life with very different metabolisms. Among them were archaic species in the deep sea that fed on sulphur in the absence of sunlight. Other species in the shallow ocean were already photosynthesizing, among them the green and purple sulphur bacteria as well as iron bacteria. However, these early forms of photosynthesis were anoxygenic, whereby no free oxygen was produced as a metabolic by-product. These bacteria were able to oxidize the dissolved iron in shallow seas without the presence of free oxygen. As a result, large amounts of a gel-type rust were deposited on the sea floor. In contrast, new species of bacteria increasingly thrived during this period. These cyanobacteria, often referred to as blue-green algae, were the first to release free oxygen into the light-flooded shallow seas as a waste product of their oxygenic photosynthesis metabolism. These cyanobacteria also formed the first reef structures on the young planet in the form of laminated limestone structures called stromatolites. The biogenic oxygen produced by these cyanobacteria immediately reacted with the iron dissolved in the seawater and was precipitated as iron oxides on the sea floor. Depending on the quantity of iron emitted by hydrothermal vents and its availability to the shallow water biotope by upwelling ocean currents, either dark rusty-red layers of iron-rich hematite or light bands of microcrystalline chert were deposited in alternating layers. Over a period of billions of years, the strata were exposed to high pressure of the overlying sediments resulting in high temperatures that slowly transformed these layers into the banded iron ores of Karijini. Thunderstorms with torrential rainfall periodically transform the tranquil creeks and streams of Karijini into powerful flash floods. As a result, the rivers slowly dissect the landscape and cut into the extremely hard rock, exposing the impressive layers and colors of the banded iron formation in the Hamersley Gorge. At dusk or dawn, when the sun illuminates the clouds from below, these ancient rock layers burst into the most intense colors for a fleeting moment, lending even more magic to this spectacular landscape. January 2017 Canon 5DSR, Rokinon 14 mm, f/22, 1/15 to 4 seconds, 50 megapixel, ISO 100, tripod [+]