An mountain adventurer since his teenage years. On his many trips to the Icelandic mountains and wilderness the photographer became obsessed with capturing the raw beauty of the places he visited. Over the years he has captured Iceland's most wild places on his camera from the colorful and never ending midsummer arctic sunset to the inspiring displays of northern lights in winter. 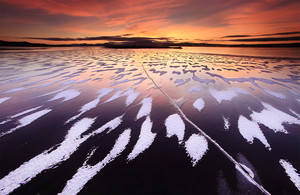