Born in 1986, Guillaume Bily practices photography since his youth and has an early passion for landscape photography and wildlife. He studied for four years photography at school Etienne-Jules Marey in France. At the age of eighteen, he entered the BIOS agency while continuing his studies at university.
Recently he has tried to highlight the landscapes and wildlife, always trying to recreate the atmosphere but also the emotion he felt in these wild areas covered during long trips, mostly in the northern hemisphere (Scandinavia, Scotland, Iceland, United States ...).
At first black and white took an important place in his work. In 2008, he was selected by the BBC Wildlife Photographer of the Year in the Black and White category, and presented his first exhibition devoted entirely to black and white in 2010 at the Festival of Montier-en-Der (France) and then in 2011 in Namur (Belgium). In 2013, with his work ‘‘Flight’’, this time dedicated to the European avifauna, he signed a new monochrome exposure for the festival de l’Oiseau (France).
In 2012, he left in a solitary journey of four months in Norway and worked about twilight. He started a new work, in color, called “Towards the Dark” in order to account the blue color of the darkness he particularly likes. An exhibition, an audiovisual show and a little book were created to share the atmospheres of the norwegians twilights.
This exhibition has been presented in 2013 in Namur (Belgium) then in Montier-en-Der (France), where he received two photographic prices. In 2014, the exhibition was presented at the festival de l’Oiseau (France), where he received the Grand Prix Award of the festival.
In 2015 he published "Wild Lights". This book is the result of few years work and concentrate landscape and wildlife pictures about twillight and dawn in scandinavia.
During the year 2016, he was a member of the jury of the prestigious german contest, GDT and was selected at the BBC Wildlife Photographer of the year in the "birds" category with an image of his new series: Ocean.
Passionate for a long time by the sea and the marine birdlife, he will sign a new book and a new exhibition about the ocean. His work is exhibited at the BlinPlusBlin gallery, in major festivals (Montier-en-Der, Bird Festival, Namur, ...) but also in two prestigious places that are the Yacht Club de France and the Yacht Club of Monaco.
In 2019, he also won the Landscape Award of the GDT European Wildlife Photographer of the Year and is also highly commended in the same category with an image of the series "Ocean": "The singing of the sea". 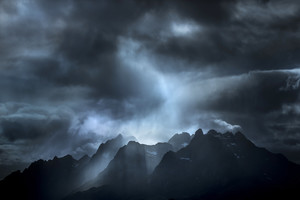 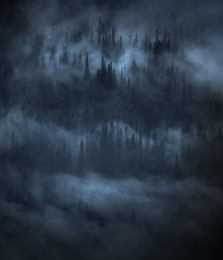 A forest in the sky
Norway