Selection of June 2021: In Heaven who cares about Dreams by Christian Klepp 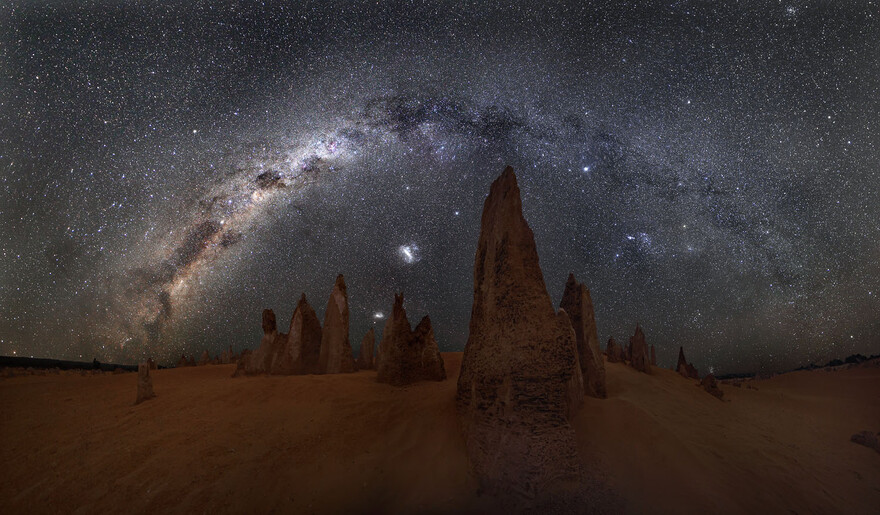 In Heaven who cares about Dreams by Christian Klepp

The Pinnacles of Nambung in Western Australia tower beneath the majestic arc of the bright Southern Milky Way and the Magellanic Clouds, two irregular dwarf galaxies orbiting the Milky Way galaxy.

It is not difficult to imagine that this image could well have been taken on a distant extrasolar planet. These pinnacles are rock towers up to 5 m (16 ft) tall that mainly consist out of cemented 10.000 years old dune sand. Most of this sand consists tiny remains of carbonate-skeleton organisms that lived in the warm ocean, transported inland by prevailing strong winds. However, the dunes solidified only in places where trees were growing on top of them. Rain water was percolating down to the tree roots and was solidifying the sand. Over time, the tree roots rotted away while the hardened dune sand was preserved. Later, the wind displaced the non-hardened dune sand leaving behind the pinnacles we see today.

At this remote place, with no anthropogenic light sources around, the austral summer Milky Way twinkles in all its pristine glory. The brightest parts of the Milky Way are in the Scorpius constellation just above the left horizon, intersected by a band dark stellar dust clouds blocking off the starlight. The Centaurus constellation is home of the bright star Alpha Centauri, also named Toliman, and is our closest neighboring stellar system in a distance of 4 light years. Famous Southern Cross is located to the top right of the dark stellar dust cloud called the Cole Sack.

Both Magellanic Clouds are just atop the pinnacles, two irregular dwarf galaxies orbiting the Milky Way galaxy. They are orbiting our Milky Way in a distance of about 160.000 light years. The northern part of the Milky Way is dominated by the super bright star Sirius followed by the well-known Orion constellation and the Taurus with its prominent Pleiades star cluster directly at the horizon.

A night out under the bright vault of heaven with the towering pinnacles is a truly unique experience. Technically, this starscape photograph is a 180° horizontal and 180° vertical composite of 9 static landscape images and 27 dynamic star-tracking images, each taken with 14 mm focal length and 6 minutes exposure. The image features a resolution of 57 megapixels.