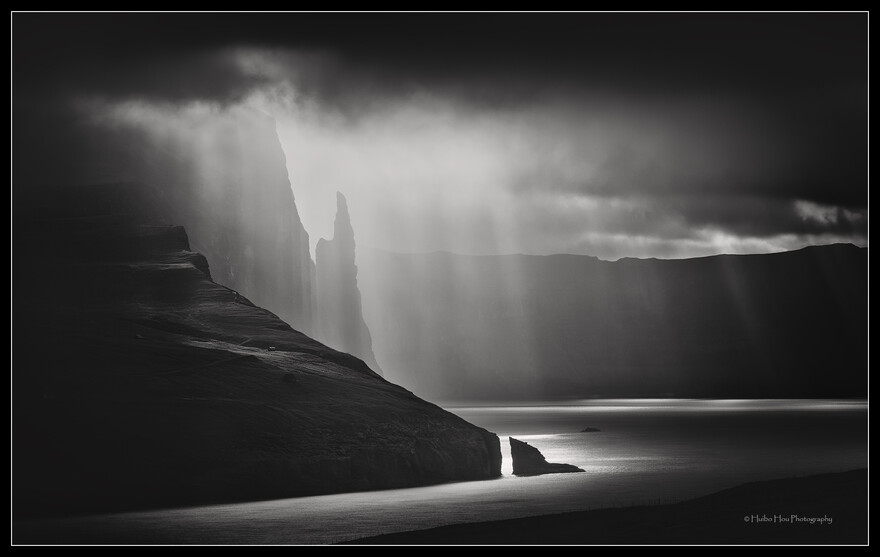 This photo was taken in Faroe Islands in July 2019 during a 2-week photography trip with my friends. The rock in the center is called Trøllkonufingur (meaning witch's finger), a 313m tall monolith on the island of Vagar. There are multiple angles to photograph this famous rock. This photo was shot from a sizable distance to the rock near the trailhead to the Lake Leitisvatn. With the help of photo app Planit we kept coming back to check out a couple of promising locations, and at the third time we got very lucky. On this particular morning we had one of the best conditions of our entire trip. The sun was trying to break out from the clouds and haze, and cast down these gorgeous, constantly moving light beams. The light show went on for quite some time.

I love this photo because it truly showcased nature’s raw beauty when everything fell into place, and black and white worked beautifully for this image. The composition is pretty straightforward. It was shot with my EF70-200mm f/2.8L lens on a tripod, at 200mm, 1/250s exposure. Although the good light went on for over half an hour, I didn't know how long it would last at the time and feared it would disappear any minute, so I just kept shooting and didn't get to experiment with my longer lens (my 100-400 lens was in the bag). I wished I had done that so I could have tried some more intimate perspectives.

The original color capture is already quite atmospheric, so I knew a black and white would really excel for this scene. Prior to converting this image from color to black and white, I had to do some cleanup. There was a big barn under construction at the very edge of the bay at the time during our visit, and part of the barn (with only framing done and without the roof) protruded into the bottom of my composition. I had to keep it in my shot to keep my composition balanced. Then in the postprocessing I removed the barn. Another major postprocessing step is about the surface of the bay. There were a lot of small ripples in the water. I generally do not like too much texture unless it is very important to the overall effect. So I blurred the water slightly in the postprocessing in order to appear calmer. The rest of postprocessing is all about using black and white tonal control to accentuate the lights and atmosphere. It was not hard to do for this image (and many in the same series) because the weather god did most of the job already!