Selection of October 2020: While We Sleep by Maxime Daviron 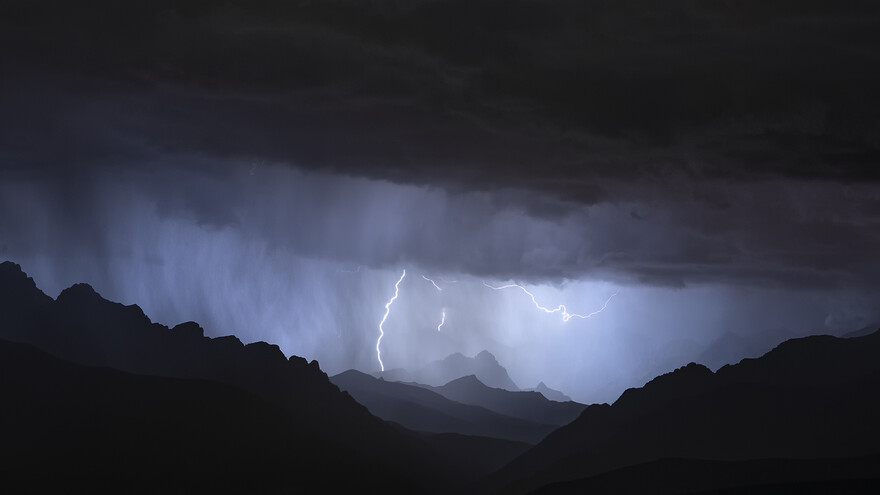 While We Sleep by Maxime Daviron

This picture was taken on the first evening of a 4 day trip in northern Spain, which, as often, was fully dedicated to storm chasing. On this night, my "target" was a spot located in the western Pyrenees that I had spotted a while ago, and this occasion was perfect to finally try it. I have been working for a few years on photography series which is about thunderstorms at high altitude, and I spend most of the summer travelling and trekking for that purpose.

On this day, the thunder started to roll above the peaks at the end of the day, but the storms remained "shy" for a while. Then, when the night fell, the electrical activity finally started to intensify. I was focusing on that "corridor" valley, which was ending at central summits. Often, I composed my picture symmetrically; put aside the only graphic aspect, this allows to close the frame and to bring the eye back to the central part. Also, with the very special light of the lightning flashes at night, this creates successive layers of black, transforming the mountainscape into a minimalist, Chinese shadow vision. This light, added to the surrounding darkness of night, was one of the most important part, along with colours, textures and elements. That set the whole mood and atmosphere of the picture. These different elements, and the way they were arranged made me select this "good" picture from among all the others, as it fit my original vision. The "difficult" part of this was that I had to keep the same frame for a while, despite that the lightnings were striking on the left side at first, but then, the storm moved from west to east, so it was just a matter of time and patience. The only other difficulty that night was the very strong wind, which can cause problems while using a focal as long as 85mm. Luckily that night, the only moment when the camera really needed to remain steady was during the lighting strikes; the rest of the time, the sensor wasn't catching enough light to expose the picture.

About the post-processing, it remained pretty minimal. It only consisted of rendering the atmosphere, and to recover as many details as possible from raw image, in many parts of the image (curves, colours, but no manipulation). The final picture also needed to fit in the series, so the blue shades needed to be adjusted, though remained as close to my memory as possible (but I usually adjust the white balance in the field in order to keep it as accurate as possible too).