Selection of May 2022: Luminous Lands by Alex Noriega 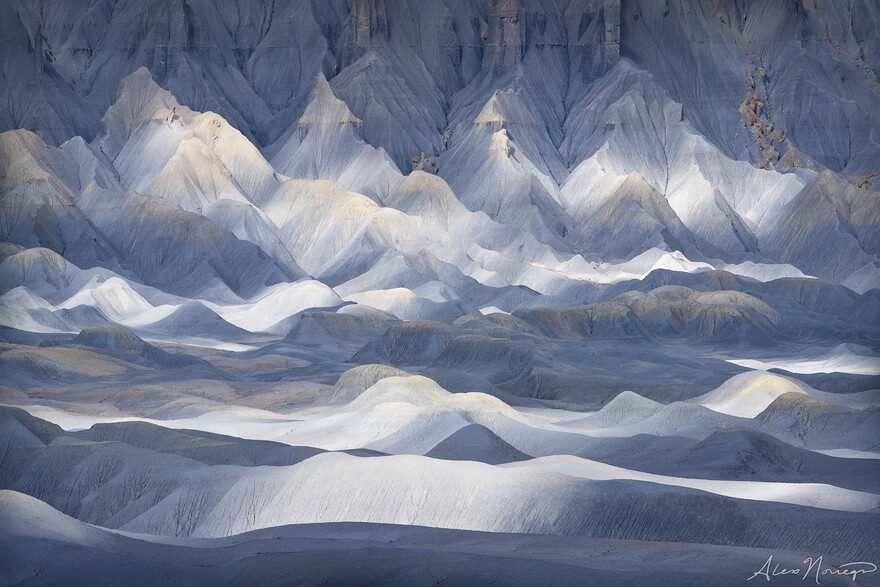 This photo was not the result of specific research, but rather of spending lots of time in one of my favorite places in southern Utah, USA, which is full of these badlands. I had been camping nearby for two weeks, and finally there was a day with some clouds. From my travel trailer, I noticed they were casting shadows across the vast landscape in the distance, and immediately rushed to the area in my vehicle and began photographing. I followed the cloud shadows, photographing along the way, as they progressed across the landscape until they reached this area, of which I have several aerial photographs. After a couple hours of this process of shooting, the clouds dissipated and there was only standard, harsh late morning to midday light remaining.

The composition was decided by (and created by) the light and shadow. I simply followed the light all morning, shooting all sorts of compositions (a couple more from that morning can be found in my 2021 portfolio on my website). The difficulty with this kind of fast-moving light created by the shadows of the clouds is being prepared to photograph a composition when the light is perfectly distributed. In this case, I was trying many permutations so as not to miss any opportunities, and actually shot one slightly to the left and one slightly to the right of this composition. I later decided to combine these as a 2-exposure panorama in post, and cropped this composition out of the middle. The "best" composition was exactly between the two that I could not decide on!

The primary considerations in post-processing were 1) a cooler white balance to emphasize the bluish-gray color of the badlands and to lend a pure "white" feel to the light, and 2) extensive cloning to return the scene to its natural state, because this area has been recently opened to all-terrain vehicles and is now covered in unsightly and unnatural tire tracks.