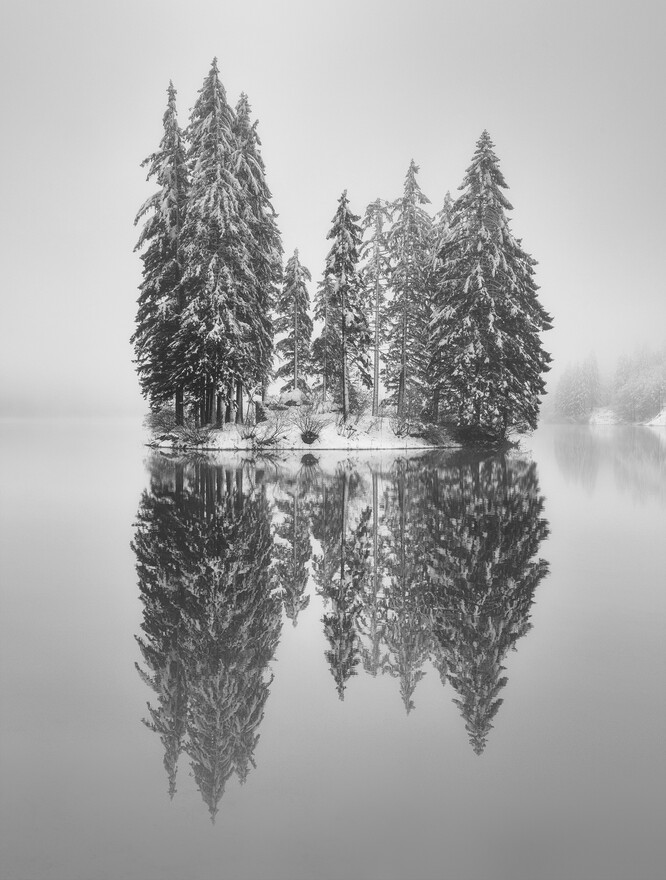 It was the first snowy day of the season, so I decided to visit Lago di Predil. It is close to the border with Italy so it's only a short drive away from my home. This small island has a very picturesque background with high Alpine peaks standing out. I wanted to take an image of a snowy island with grand mountains in the back. But when I arrived the scenery was completely different than I imagined. It was still snowing a bit, but the storm refused to reveal the mountains behind. Instead, I was greeted by conditions that I have never seen before at this location. Only the small island was visible and I quickly realized that it's a great opportunity to take a minimalistic image instead of a grand landscape.

The composition is very straightforward as I didn't have much choice. The foreground was very plain so there was nothing I could really add to that scene. So I decided to make it as minimal as possible and making that perfect reflection as the main subject.

I first process the image in colors and it looked great like that also. But as I tried to pull more and more details from the reflection I realized it would probably be better in BW version as I could increase the clarity without damaging the image too much. I added quite a bit of contrast, clarity, and whiteness to the image as I really liked the high key version of the scene. This kind of processing really shows what I saw that day. Almost complete whiteness all around me, except for that small island standing out.