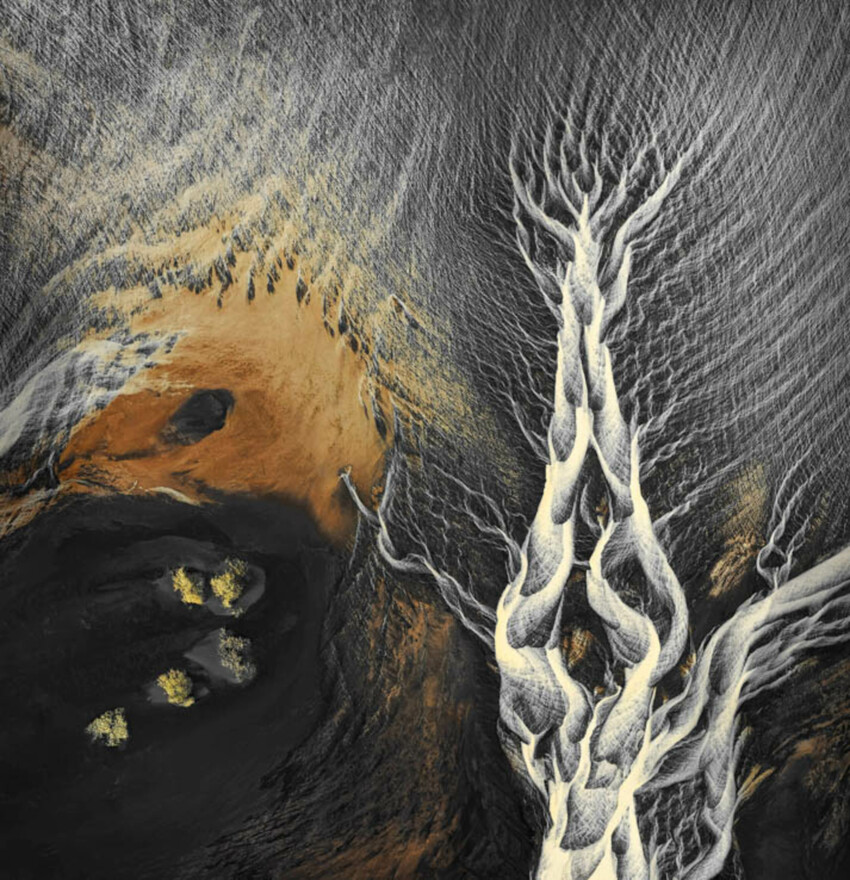 The Image “Life” was created in Iceland, where my best friend Mieke Boynton and I had been planning a trip for some time. The trip was planned solely as an aerial photography trip where we were hoping to Capture images of the glacial river systems. The planning was extensive, neither of us had been to Iceland before, we had no idea of distances, light, weather and companies who would be able to fly us and do what we wanted to do.
We did our flying with Flightseeing - Atlantsflug who were exceptionally helpful. We had incredible flying weather for all of our planned flight which is apparently not very common. Google earth and other aerial GIS mapping and satellite programs were used and fortunately our research using these services payed off and we were very happy with the locations we chose. This image was the last series of images I photographed on our last flight, It is of the Glacial river formations, volcanic sands and sulphur coloured water, I saw the incredible formations created by the rivers off to my side and asked the pilot to head over so I could capture it. Fortunately it didn’t put us over in our fly time! for me this image perfectly describes Life, the importance of water and the organic growth it creates.

I flew with two cameras, one had a zeiss 85mm prime lens and the other a zeiss 35mm prime lens. My preference is always the 85mm when I am flying, however when in a plane it is very restrictive with composition, also the windows on the plane restrict your angles significantly, I usually like to photograph looking straight down and with out having the luxury of a door off flight it is not always possible. This image was captured using the 85mm prime lens. The area around this image also has a lot of other images in it and it was very difficult to not get distracted by the other incredible patterns close by.

This image is shot as a panorama stitch and comprises of 14 images, giving it incredible detail, it also gave me the ability to work with in the constraints of my chosen lens and the limitations of the aircraft I was in on this particular flight. I shoot almost all of my aerial images as panorama stitches, a technique that has taken a lot of practice to perfect.
White balance corrections are the most important part of my post-processing, as are perspective corrections (usually minor), the light is the most important part of my image capture.