Selection of December 2019: The Vision by Maxime Daviron 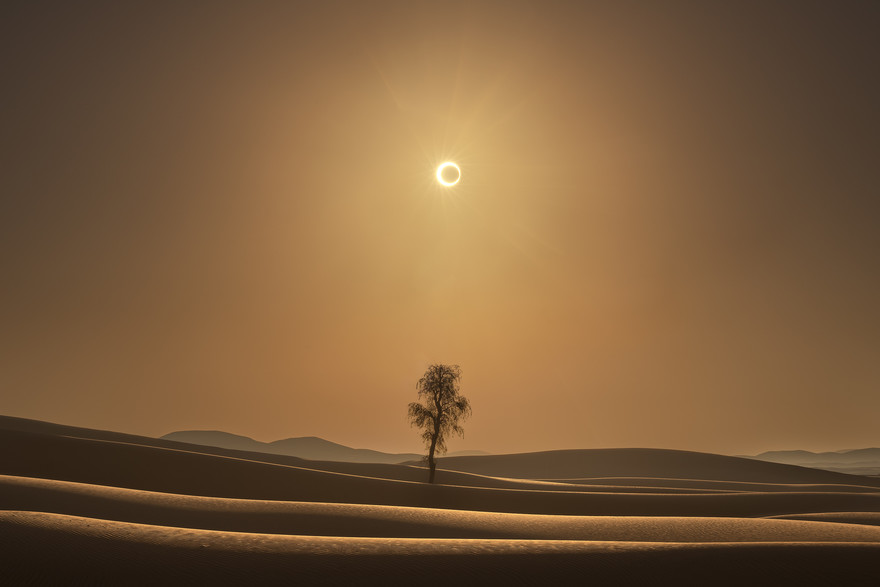 The Vision by Maxime Daviron

In December 2019, we were three to take off to the United Arab Emirates to explore the Rub al'Khali desert in order to find the ideal spot to photograph an annular eclipse at sunrise, on the morning of December 26th.

For me, the difficulty was that I wanted to compose an image a little bit different from what one would tend to imagine at first: "dunes as far as the eye can see" or a human subject placed in front of the eclipse with a very long focal length – which works well for sure, but wasn't what I wanted to do. In addition to that, it had to take place in a long-term series that I have been making since 2013, having as its main subject surreal atmospheres of different deserts around the world. The axis was therefore to imagine something quite pictorial, dreamlike, evocative of other worlds, with a composition as much "unexpected" as possible in this kind of landscape.
After several days exploring different regions of the country, we ended up discovering an interesting area that could suit everyone. It was there that I discovered this unlikely sight: a tree, lost alone in the middle of the dunes. Immediately it made "tilt" in my mind, because of how its evocative power was strong: the common concept of the "lonely tree" took on a much deeper dimension here, not to mention the purely aesthetic interest of the composition, mixing the horizontal curves of the dunes in the foreground and the verticality of the tree, which I imagined placing in the center of the image, aligned with the sun, thus finding the desired pictorial aspect. The two mornings following the discovery of the tree were therefore devoted to "rehearse" for the sunrises, testing the compositions, choosing the focal lengths according to the moment: 300mm for the sunrise, 85mm for the moment of totality.

Finally came the day of the eclipse. Leaving our bivouac at the end of the night, we arrived on the scene at dawn. Every one of us at their "post" (the two others were something like 20 minutes of walk from where I was), so I waited alone, in a perfect silence only disturbed by the distant sounds of tiny camel farms and the rare birds of the desert. The pink glow in the east finally started to intensify, along with the tension that was rising inside me. It wasn't the moment to make mistakes while managing the various technical difficulties. Among them, it was necessary to avoid the huge flare created by the violent luminosity of the eclipse, stronger than I anticipated.
The second difficulty was to obtain a perfectly balanced image in terms of exposure. For that purpose, it was necessary to realize several exposures (on tripod, obviously without moving and at the very same time): one for the foreground, one to eliminate the flare by hiding the sun and several for the sky and the eclipse.
The last thing to pay attention to was the diagonal progression of the sun, especially in the case of this image of the totality, for which I had to maintain both the subject (the tree) and the eclipse in the center of the picture, well aligned.
Despite all these things to think about, the moment was particularly incredible, magical to live. At the beginning of the totality, a cold and powerful wind rose with as the shadow was becoming denser. The crescent became a ring for a few moments, before the invisible moon emerged from the other side of the solar disk. The wind died down, and the pressure with him. The hardest part was done. I finished a few minutes later, when the light began to get too hard, the sun too high, and while the eclipse was about to end. After ten days of exploration, interrogations and pressure, it was finally done: the image, whatever it was, was in the memory card.

Once back in France, the delicate phase of post-processing began: it was a matter of transcribing as faithfully as possible what I had seen, and above all of rendering the final images perfectly exposed. About the white balance, I took care to adjust it manually in the field to keep it faithful to what I saw, and not to let it free to interpretation a posteriori, having forgotten what the color of the sky really looked like. The difficulty was therefore to mix the different exposures, which took a little time to "solve".
Once the blend was made, I only had to make my adjustments: a very soft ton, then just curves and colorimetry so that the image was balanced, consistent with the rest of my series made in this desert and the series "Les Étendues Arides" in which it was going to take place. As for the flare directly located around the eclipse, I decided to leave it while attenuating it slightly, liking the "starry" effect created by the diaphragm (F16 for this exposure) – the flare located "on the ground" having been eliminated when shooting, by masking the sun on one of the exposures.