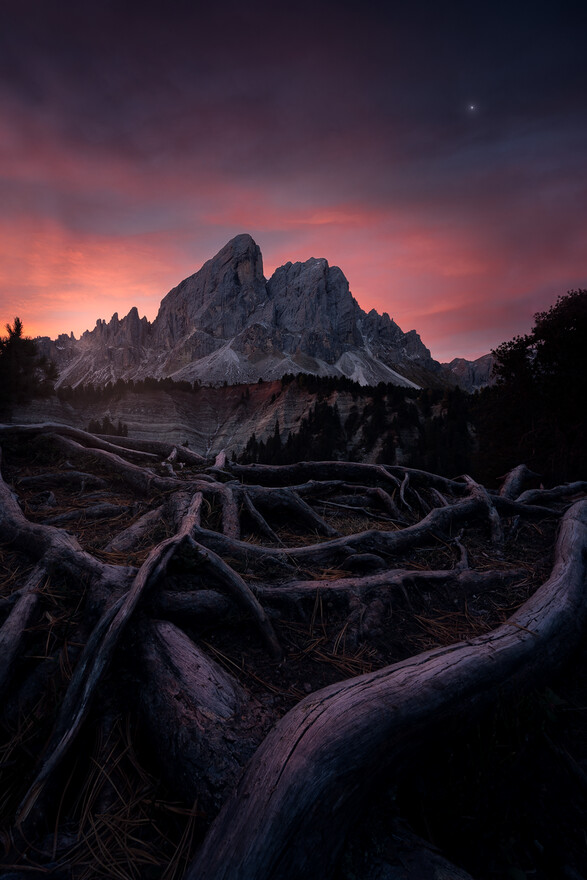 The photo was taken at one of my photo workshops that I organize. This one was taken in the Dolomites. I usually don't take photos on my photo workshops, except exceptionally, when it seems to me that the light and conditions are excellent. That was such a moment, during the blue hour, before sunrise, when I noticed that the sky started to catch beautiful colours. I did well, that moment was excellent and the place too.

Maybe I'd like to embellish how challenging it was, but really, it wasn't. I had already had in my mind the composition, and I knew the place well. It took me only a few moments to take this photo. I took pictures with various focus points and I filmed it on my mobile phone. As I said, I already had the composition selected in advance. I was interested in the nice roots in the foreground, which formed the letter V at the bottom of the picture. That V opened up space for the mountain in the background. The mountain is the Sass de Putia.

I have the theory that taking a photo is just one part in the photography process. I don't see anything wrong with that, sometimes there are more adjustments and they radically change the given photo, and sometimes there are fewer of them. And here, I have to say that there were few of them. I'll start with what I try to avoid in photography, which is colour disharmony and strong colours. More important than colours in the photo, is the atmosphere. That's the right word for what I'm trying to achieve and what a landscape photograph should have from my point of view. It is necessary to breathe soul and atmosphere into the photo, it must be interesting. Despite today's trends, when, under the influence of social networks, likes are chased by saturation. Since it is a blue hour with reflected light, I tried to adjust the photo as if it was a few minutes before taking the photo. I pulled the exposure down slightly and combined three planes of focus. I also retouched the tree branches on the sides, which bothered me a bit. Then just a proper dodge and burn and that was it. It was not difficult, since there was already a lot of necessary data information in RAW.