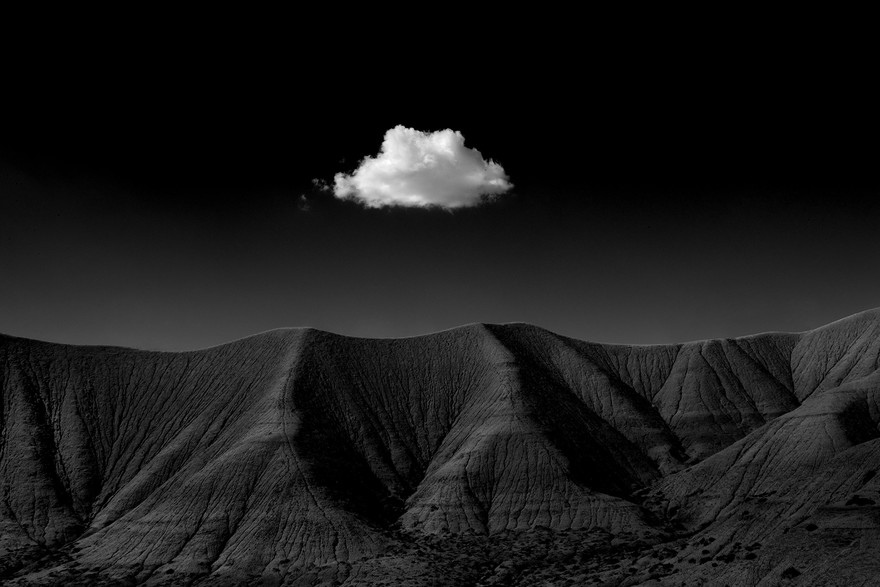 Harbinger No. 1 by Cole Thompson


This month Cole Thompson talks about his black and white image "Harbinger No. 1", a  spectacular image that we have decided to feature.

In his refreshing style, Cole explains:

"Several summers ago my son Jem and I were taking a road trip through the western states, it was meant to be both a photography trip as well as a father and son trip. We were in Utah and it was about 150 degrees (or so it felt) when I spied these great mud hills off to the north.

Sensing a good image, we hiked to a vantage point where I could photograph this set of wonderfully symmetric hills. I loved the dark mud and the deep blue sky, but the image was lacking something. I wanted to stay longer to see if I could solve this photographic riddle, but my son had other ideas.

Photographing with a child is a real challenge for me. I go into “working mode” which means that I withdraw into my own world and want to be left alone. My son on the other hand goes into “bored child mode” which means he repeats the following, interspersed with loud sighs: Given the mediocrity of the image, the oppressive heat and my son chipping away at my stamina…I gave up, packed up and headed back to the truck.

But once back I spied this single cloud moving very fast across the horizon. I could see by its trajectory that in about a minute it would pass right over those mud hills that I had just been photographing.

This was a beautiful little cloud that was heading towards a wonderful setting…when suddenly I realized that this could be my “Moonrise, Hernandez” moment!

I told my son that I was going back for one more shot (he let out a loud and exaggerated groan) and I ran just as fast as I could. I quickly set up my gear and was able to get a single shot with the cloud perfectly situated above those mud hills.  And that is the image above.

As I looked at the image on the camera’s screen, the name "Harbinger" immediately came to mind.

When I would show this new image to people they would ask: “are you going to do a series of them?” I honestly didn’t think I’d ever find another solitary cloud like this one and would tell them that while I would love to, I doubted it would be possible.

But over the next couple of years something interesting happened.  Being sensitized to this concept, I started to find other Harbinger opportunities until I had created small collection of them."